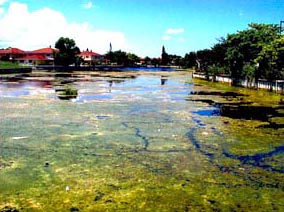 As the water warms, oxygen can be consumed faster than it can be replenished. The warmer, oxygen-rich upper water lays on top of the cooler, more dense, lower-exygen water. This inhibits levels of beneficial bacteria and their breakdown of organics. Bottom muck and nutrients accumulate enabling plant/algae growth and makes conditions favorable for the production of noxious ammonia and hydrogen sulfide gases.

Moving the lower-oxygen water from the bottom increases the oxygen levels throughout the water columns preventing fish kills. This allows fish to expand their territory to formerly oxygen-deprived protions of the lake improving sport fisheries. 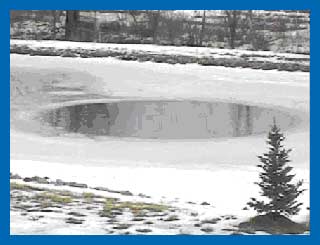 Often the most important to pond owners and managers is the prevention of winter fishkill due to lack of oxygen under the ice. Winter pond aeration will keep areas over the diffusers open and free of ice and maintain safe dissolved oxygen levels.

Trouble starts when harsh winters cause ponds to freeze over and ice becomes thick and/or covered in snow. Sunlight cannot penetrate the ice as well and without sunlight there can be no photosynthesis, causing oxygen levels to decline. Oxygen diffusion at the surface is also blocked by the ice coverage. With little or no oxygen being produced and the demand remaining the same, fish will begin to die, often resulting in a large scale winter fish kill. Shallow, weedy ponds are especially susceptible to oxygen depletion and should consider winter pond aeration.

Winter pond aeration will prevent winter fishkill by keeping areas of the pond ice-free which will allow oxygen to enter the pond at the surface through diffusion and agitation as well as direct transfer from the compressed air in the bubbles.

There are other good reasons to keep waterways open in the winter. A popular reason for winter pond aeration is to allow open water for waterfowl utilization. Whether it is for hunting, conservation or bird watching, if there is open water in the winter, waterfowl will find it!